THE EVOLUTION of CALPURNIA TATE by Jacqueline Kelly 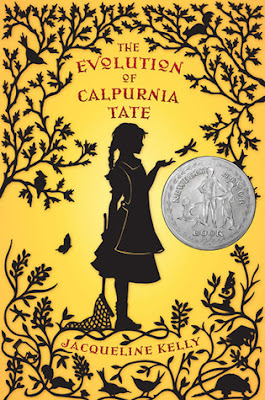 We are in Texas, a few decades after the Civil War.

Calpurnia's father owns a big important cotton gin and behind her house there are the old slave quarters, out past her Grandad's laboratory, a place where the old man spends his time trying to distill pecans.

A couple of black women work in the house to help Calpurnia's mother to keep it.

Calpurnia likes nature and she is a smart girl who writes interesting questions down in her red covered notebook.

One day she decides to borrow 'The Origin of Species', the brand-new book written by Charles Darwin, from the public library. Unfortunately times were still green for a scientific theory of evolution and she only gets a disappointed reproach from the librarian.

To fully explain the historical period, we can say that the 'wind machine', a ventilator, was a revolutionary new invention. Later on, we'll find the 'Bell Telephone Company'  installing the first telephone office in town, the fizzy  Coca Cola appealing to children at the Fentress fair together with the just-released first auto-mobile!!!

So, surrounded by this period of great changes, Calpurnia  gets home and, there, she is lent a copy of the Darwin's book by her own grandaddy: it's  the starting point of an exciting scientific collaboration and friendship.

Their summer suddenly becomes much more interesting: she follows her teacher along the river banks to collect specimens and observe bacteria through a microscope. She develops her own scientific researches and keeps writing interesting questions in her notebook.

In other words she discovers what Science is.

But her mother has a different plan for her only daughter, so Calpurnia has also to learn a different kind of science, less amusing to her: housewifery.

She must take classes of piano, cooking and tatting to prepare herself for her coming out in society to find, one day, a husband to build her own family and keep her own house.

The book tells of months of intense personal inner growth and struggle for our young heroine.

Otherwise 1900 finally arrives. It's the beginning of a new century loaded with unexpected events, and promises for a future that definitively breaks from ancient lways.

It's a hopeful future for Calpurnia too.

I loved this book, first of all, because it evoked my long summers off from school when I used to spend my time scampering around outside my house observing nature and its wonders. Curiosity has always  linked children all over the world and observation is the secret 'to see things you've never noticed before'.

It's fascinating how Calpurnia gets every day more conscious about the contrast between what she would like to be and, on the other hand, what society wants her to be.

A second reason to love this book is the detailed portrait of the American culture during the late 19th Century which is slowly stepping into modern times.

It clearly shows the divergent points of view among religious people and those who were embracing science.

Finally I've been captivated because it gives an historical perspective to what we just study as 'science' at school. It makes visible that theories, like the evolution,  presented in our books aren't there just because someone one day decided that they were true and globally accepted.

Quite the opposite! Science had to struggle with old ways of thinking. Actually every renewal, personal or social, requires time, enthusiasm and faith, as Calpurnia's experience suggests.

To work with your class:
Discussion Questions

More great books:
The wonderful Wizard of Oz
James and the Giant Peach