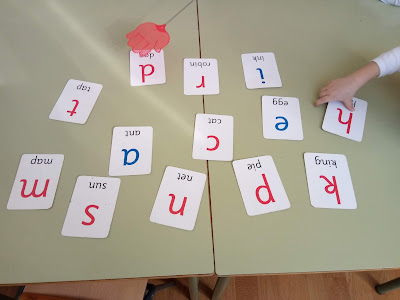 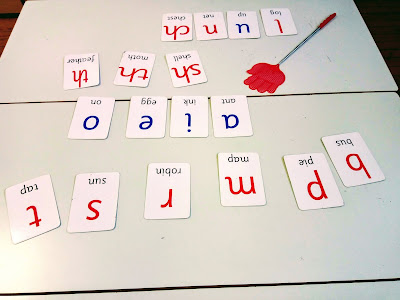 Some time ago, I wrote about the auditory discrimination of 2 vowel sounds that are difficult to distinguish by Spanish speakers: the e and the i. Several months and several phonics later, I am going to propose more discrimination exercises that can be worked on with your students to get them used to recognizing them.

Among the vowel phonemes we can focus on the discrimination between a and u, and in a second moment we will add the o. It is important to choose short words of 3 or 4 letters with only one vowel sound so that our students do not get confused. That means words such as cat, cut, cot, or pat, put and pot. 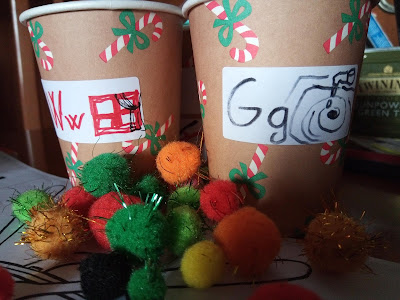 Other vowel sounds that we worked on this year were the i and the digraph ee, so that the children can see that the first one is a 'short i' and the second one is a 'long i'. If you accompany the words with the movement of both hands, moving them closer or further away depending on which sound the words have, you will help students to notice the difference even more. Some examples are: sheep (hands away) and ship (hands closer) or beet and bit, feet and fit, etc.

Finally, these last days we saw the digraph oo that can also be pronounced by lengthening or shortening the sound as in moon /ˈmuːn/ or in hook /ˈhʊk/. Again we use our hands to highlight which is the 'long u' and which is the 'short u', when we pronounce the words, to help the little ones to better grasp the difference. Other words with /uː/ (the 'long u') are broom, spoon, food, while some words with /ʊ/ (the 'short u') are cook, foot, book, etc.

Among the consonantal sounds, we have obviously worked on the b and v, which are two phonemes that overlap  in the Spanish language, creating problems when it comes to writing, in both languages. Finally, the latest phonemes we saw were w and g which are also problematic, but, in this case, when it comes to pronouncing them: many children when they read the word wood aloud, would pronounce it good. You should insist on the positioning of their lips and, if nothing works, you can always give them the example of Huelva or huevo, so that they can grab it immediately.

But... How do we work them out? Easy, peasy. At the moment, since my pupils are third graders who don't have to write anything yet, I just concentrate on the auditory and visual features. I usually use cute paper cups to which I apply a white label. On the label I write the sounds in large letters, both upper and lower case, and I also draw one or two pictures of words that start or contain the same sound. As you can see in the picture, I use pompoms of different types: these are all glittery for it was Christmas time, but, of course, I have  pompoms for workdays, too :o)

I use two different exercises: the first one consists of sitting 2 children (or 3 depending on the number of cups) in front of all the others (at a distance of 2 o 3 meters). These 2 or 3 hold the cups well visible so that their classmates, who must also be sitting, can place their pompoms, in the correct cup once a pompom has been distributed to each one, when they hear the word.

In the second activity I do not use pompoms, instead, I divide the class into two groups and sit them facing each other at a certain distance. I alternate words that contain the sound I want to work that session with others that do not have it, and the children, when they hear the right phoneme, have to swap places with the one in front of them. This is just an adaptation of the game 'Change places if...' and I have only been able to use it with the 5-year-olds, because it seems that the 4-year-olds are not willing to give up their seats under any circumstances 😀

It's been a long time since my last post, because I've been a little busy designing some entertaining activities to review all the phonemes we saw last year, among other things because new children were enrolled in the classes. I also wanted to take advantage of the fact that the children were one year older to introduce simple crafts in which they could practice a little more their fine motor skills and manual oculus coordination... so much mental work and so little free time!

Today I wanted to show you the 3 board games - soon there will be 4 - with which I work the phonemes, together with the official material of the Jolly Phonics method such as the Activity Books and more material that comes to mymind as I go along in accordance with the needs and inclinations of the different groups.

The first game is called Pass the Word #ad and consists of pieces that fit together like a puzzle, some of which contain a picture with their respective word and others contain letters of the alphabet. The game is about taking a piece with the image and looking for the letters that make up the word, as you can see in the photos. With this game, in addition to the visual recognition of the letters, you can check whether children already can 'write' the words in the right direction, ie from left to right or in the right order. In any case, it helps children to develop these skills through a manipulative game which entertains them a lot.

The latest member of the family is called Match and Spell #ad It contains 12 double-sided boards with three-letter words, 8 double-sided boards with four-letter words and several cards with letters to 'write' the words that appear on the boards. It presents 2 levels of play: in the first, the children, once they have chosen the board they want to complete, look for the letters one by one and pronounce them until they read aloud the whole word.  The second level of the game consists of choosing a board with the side that does not show the letters face up, only the image and the blank spaces, and taking the letters as they are pronounced. Here we also work on the visual recognition of phonemes, phonemic awareness when they use the boards without the letters and begin to develop the first reading skills. I especially like this game because it is very similar to some Montessori reading and writing preschool activities, which is one more guarantee of its usefulness...

The fourth game I'm going to buy soon is another Match and Spell, but NextSteps, #ad in which the boards and the cards come with words containing the 'digraphs' we're reviewing these days, such as sh-ee-p, b-a-l-oo-n, t-r-ai-n, qu-ee-n, and so on.

Have a great summer!

It has been a year full of experiences and has enriched us with a lot of knowledge, especially about the processes behind each learning.

We have talked about the fundamental role that emotions play in the teaching-learning process in this post.

We have given very practical indications on how to make the most of every subject taught in English in bilingual schools in this second post.

We have presented very valuable tools to improve our children's level of English with a view to the official Cambridge exams, but also to enjoy reading adapted classics and more contemporary stories: the 'readers'.

And finally we have concentrated on the processes of acquiring English literacy through the Jolly Phonics method: we have told you how I organized the classes, underlining the importance of the use of fine and gross motor activities, which should always accompany any learning, along with playful activities, since they have the great advantage of capturing 100% of the attention of the youngest; and finally we talked about pre-reading, first with short word blending exercises and then enriching the experience with stories and games.

I hope it was useful and that you enjoyed the process as much as I did.

See you in September!