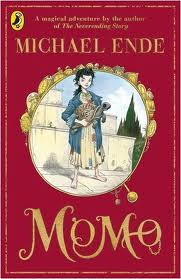 When I was 10 I was shown a movie entitled 'Momo'. I remember there was this little orphan with an 'unruly mop of jet-black hair' and everything was kind of grey. I also remember that the film was about time.

Three good reasons to embrace the adventure of reading this book, written by the author of 'The Neverending Story', Michael Ende, and published for the first time in 1973 in Germany.

No-one knows Momo's age. She lives by herself in an little room under the ancient amphitheater at the edge of the city. She makes a lot of good friends because she knows how to listen to people and at the same time it seems that she helps them to improve the good side of themselves. Every day many inhabitants of the city spend a good time with her, either playing or chatting.

But a grey shadow is planning to rule the city in a very different way. It's the Timesaving Bank and its men in grey. They want to steal people's time. They need it to exist. But 'time is life itself, and life resides in the human heart'.

So they convince everyone, little by little, not to waste their spare time. They want people to work as hard and fast as they can. No more chats, no more daydreams, no more love. 'All that matters in life is to climb the ladder of success, amount to something, own things.'

But Momo is different. She doesn't need anything. She only cares about her friends and the special moments they spend together.

One day she finds the doll 'Lola' waiting for her at the amphitheater. After her, a man in grey also appears. The particular doll can talk, but she only wants new outfits. That's why from the boot of the grey car of the man in grey, one after another, a huge quantity of doll's stuff starts to appear. Because 'There's always something left to wish for.'

Momo answers something about love to him and suddenly something unexpected happens. The man in gray feels a strong desire to tell her the truth about him and his organization. He keeps talking until he realizes that it 's the secrets of the Timesaving Bank that he was revealing. He stops and escapes from that uncommon little girl and  'like an explosion in reverse, all the dolls and their scattered belongings flew back into the boot.' This is one of the best scenes of the film, at the very moment I read the passage I could clearly see in my mind all this dresses and shoes flying back into the grey car.

Here you can see the Spanish version of the scene:
http://www.youtube.com/watch?v=DWYd-TabJdA&feature=related

After that many adventures entertain the young reader (and the old one).
I only would like to highlight some of the most illuminating passages in the book: concepts and ideas that are absolutely modern despite the book's age.
For example at some point of the story children are no longer allowed to play children's games in the streets. 'Child Depots' are built by the men in gray. There 'the youngsters can be moulded into useful and efficient members of society'.

What kind of society they refer to is the question that immediately arises.
The answer lasts a line: 'A world dependent on computers and nuclear energy'.

Does it ring a bell to someone out there?

Into Child Depots, kids, wearing grey uniforms, are taught how to play. The author describes a game like the 'data retrieval' where all of them pretend to be a card, each one carrying various bits of information about himself, sometimes they are just long strings of letters and numbers and so on. 'It's useful for the future'. They say.

It's impressive how time is stolen second by second from people who don't even notice that something is, slowly but inexorably, changing in their lives and the relationships among them.

To be honest, I don't remember if I caught the meaning of these metaphors when I was 10. Probably not. Probably when you are 10 you just  don't like bad grey men and sympathize with Momo, feeling her pain of losing all her friends suddenly for some very bad reasons.

But probably for a child these strong emotions and surrealistic scenes are impressive enough.