I've been surfing the internet looking for Halloween games, songs and worksheets, over the past few days and this is what I came across.

For preschoolers:
Here's a list of catchy songs to learn or to use as a soundtrack during other activities:

--> Note that the Skeleton Dance will be perfect for learning body parts too.

Then I found these two games: 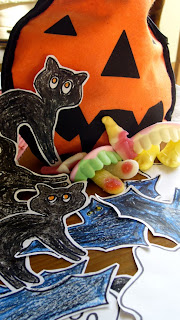 1) Circle game: Pass the Pumpkin
Form a circle and have the children sit on the floor.  Play Halloween music and pass a small pumpkin around the circle.  When the music stops, whoever is left holding the pumpkin receives a small prize or treat. (This game is from the book 52 Programs for Preschoolers).

I can imagine that smart children will fight for keeping the pumpkin, once they've discovered the trick. So I'm thinking that maybe it will be better to organize a half circle race without a prize.

Have your students sit in a circle.

The cards must travel as fast as possible till they arrive to the opposite side of the circle (opposite the first two children who started the race).

The children belonging to the half of the circle that's completed first, will be the winners.

We're going to do the same with the pictures of a cat and a bat.

Prepare sets of cards with the same pictures on each, representing typical Halloween characters. Use some blue-tack to stick them on the walls or on low surfaces in your classroom. Call out one of the pictures and the children have to find and touch the right one.

If you prefer something quieter, divide your students into small groups.
Give each group the 4/5 different cards and then call out the one they have to show. This way they can do the activity sitting on their chairs instead of running around.

Next I'll give them a coloring page  representing one or more characters we saw during the games.

Finally, they'll learn about going trick or treating, 'cause I bought an enormous bag of Halloween candies!!!

For older students I found these ideas:

4) The Daily Routine of Monsters,  Zombies, Ghosts and Aliens