We accidentally started the new school year studying THE BODY.

It happened that I came across a really catchy action song connected to some parts of our body like arms, head, nose, hands, feet etc.

My students loved it and that's why I decided to make the most of their excitement  carrying on with the topic.

First, we made a little handicraft: I drew the head, the body, the arms and the legs of a puppet on different pieces of paper. They colored and cut them. Then, we connected all the parts with clips. You can appreciate the result in the picture!

They're still in my study but we'll hang them in class, as a decoration and also as a reminder.

Next we're going to play a circle game called 'Five in The Middle' to memorize these 4 parts: head, body, arms and legs.

I prepared 4 cards for each body part, because I had 16 kids sitting in the circle.

Five children have to sit in the middle of the circle without flashcards.

The children sitting in the circle have to hold up their flashcards so that the children in the middle can see them.

You call out one part of the body and the children in the middle have to run and touch the correct flashcard held by their classmates.

Children who touch the right cards swap places with the children that were holding them. 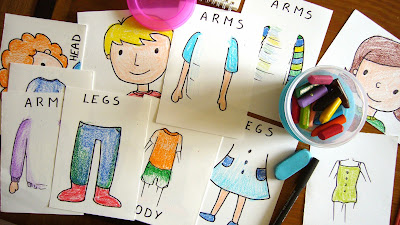 Then we'll sing the most famous song about body parts: Head, Shoulders, Knees and Toes.

Once they've learned the words and the movement try to speed up:
the faster you sing it the more interesting and fun it will turn out.

In addition I'll use some worksheets I prepared where they had to complete some pictures with the missing body parts.

I'm also thinking about using a Mr. Potato Head. Will it help?

I'll tell you as soon as I find out.