LEARN THE COLOURS! by Stephane Husar and Loïc Méhée 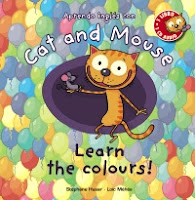 A new school year has just begun and I've been assigned to a pre-school mixed group of old students of mine, aged 5, and new students, aged 3.

The main challenge, in this situation, is how to present topics that my old pupils already know to the new ones without being boring and using material and books they haven't seen yet.

It's a really difficult problem to work out!

Fortunately, I came across this bilingual book collection, 'Aprende Inglés con Cat and Mouse', edited by Anaya, which in some way partially solves my problem, at least until Christmas!

The first book I've been using over the past two weeks talks about colors, as you can read on the title.

Cat and Mouse are the main characters who will show many balloons and teach your kids what colors they are.

The book scheme is really basic and repetitive, the pictures are colorful and bright: elements, as already mentioned in my previous post about teaching from books, that make it easier to convince young minds that a new language can be simple and fun to learn.

To complete the color experience I added complementary fun activities to involve all my students' faculties in the learning process.

First day:
I read the book aloud and then I played the game 'Touch something… Red!'
As you can imagine it's a game where they have to run around the classroom to touch something colored as I require.

Finally we sat down to paint a clown holding several balloons, each one had an assigned color written in it. This way the oldest children could start reading and recognizing the colors' spelling while the youngest ones just had to listen to me pronouncing the color's name and choose the right crayon to paint the balloon.

Second day:
We listened to the Cd that comes with the book, repeating the lines.

Then I drew some balloons on several sheets and let the children paint them using their favorite color.
Afterwards, using the same drawings, we played a game they really love.

There is a child who's the captain of the ship and stands alone at one side of the classroom. At the opposite side, there is the rest of the class (lees one) holding usually flashcards but in this case the sheets previously painted.

Finally there is one kid who's going to be the shark, placed more or less at the same distance from the captain and the rest of the classmates.

When the captain calls out a card, pronouncing these words "I can see, I can see a blue balloon across the see!!!", the student holding the blue card has to run towards him avoiding the dangerous shark's clutches!

This game is also helpful to start to get used to saying adjectives before nouns.

Third day:
I proposed that we perform a little play using the book's lines as a script.
So, two by two, each one holding a flashcard respectively showing a cat and a mouse, recited the lines while the rest of us were holding the sheets with the different colored balloons.
I can say it was great and un unexpected success!
The oldest ones, after just a minute, were acting by themselves and the youngest were, little by little, recognizing and pronouncing the correct balloon's color.
Beside, it's an activity you can repeat several times over the month. It seems they don't get tired of it!

After the 'theatre' we sat down to play the "I spy" game.
Display some animals flashcards on the table (but you can use anything colored), and then say: "I spy something with my little eye…" They must ask "What color is ti?" Tell them the color you're thinking about and they have to point to the card showing the color you said.

In this case the oldest were reviewing animal vocabulary at the same time that the youngest enjoyed the pointing experience. They loved it!

You can take a look at the whole collection on Anaya's page: Aprendo inglés con Cat and Mouse