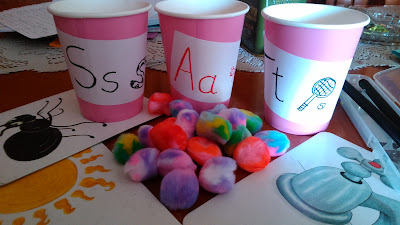 Today I am going to show you some of the activities we have been doing in class with my students. As recommended in the manual, it is very important to go over the sounds throughout every sessions, however it is also necessary to look for ideas so that this part of the lesson will be enjoyable and varied even though we are always working on the same concept.

Here you have 4 activities which can be performed in two ways:

1) At the beginning of the month, when we reached 3/4 sounds, we began to practice auditory and visual recognition with a quite amusing activity: I divided my group of students into 3 rows, and they had to jump, from behind a line of Sellotape (which they insisted on removing 2 seconds after spotting it on the floor) over the card with the letter sound corresponding to the chant, or the gesture associated with the chant, that I was indicating. 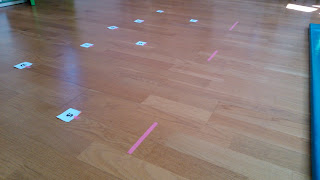 2) For the second activity I adapted the game 'Change places if you have…' which in our case consisted of sitting the children in a circle holding one of the sound cards in their hands; when calling one of the sounds, all the children who had it represented on their card had to get up and move around and change places. To make it a little more 'exciting' a student can be positioned in the center of the circle to steal the place from those who have to get up. Finally, in order for all students to handle more than one sound throughout the same activity, it is necessary to take a few moments from time to time so that each kid passes his card to the classmate beside him.

After a few sessions, when I noticed that they were already familiar with the method and controlled the single sounds, we began to do these same activities using words that began with s,a,t,i,p,n: if I told 'ink' they had to jump over the card with the i, or in the case of the circle game, those who holding that 'i card' had to change places. 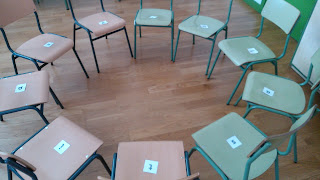 3) The third activity was that of the pom-poms in the picture: in order to stimulate phonological awareness we started using words straight away. The task consisted in recognizing the first sound and was designed to associated a third sense, the touch, to those commonly implied in this kind of exercises: 6 children kept the paper cups showing to the others the letter and the drawing that each one carries; the remaining 4 children sat opposite them and took a pom-pom each. I showed a card and said the corresponding word, e.g. 'net': The four children holding the pom-poms had to get up and put them in the right paper cup, in this case the one with the 'Nn sound' on it.

I think it's a nice activity because they like to manipulate the pom-poms and they also help each other to identify in which paper cup they have to put them. Naturally this game can also be done using 'single sounds'. 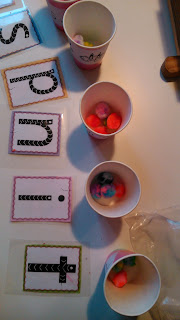 A fourth activity consists of building a fortune teller so that they discover the letters, say them and make the associated gesture. It's an effective activity because they pay a lot of attention all the time since they also like to discover what's under the flap chosen by  each one of their classmates.

Overall, the truth is that it has been quite an intense month and I have to admit that there has been a lot of trial-and-error work, but the best thing is that the children are learning even though they don't realize it... at least until they get the right answer at the first  attempt.


This Blog participates in the Amazon Service LLC Associates Program